Anger over India’s diplomat calling for ‘Israel model’ in Kashmir

In video posted by filmmaker, India’s consul general to US seems to advocate Israel-like settlements of Kashmiri Hindus.

A senior Indian diplomat has triggered a controversy by calling for the adoption of an “Israeli model” in Indian-administered Kashmir, which is reeling under a crippling military lockdown and internet blackout for nearly four months now.

An hour-long video featuring Sandeep Chakravorty, India‘s consul general in New York, has gone viral on social media, in which he is addressing a group of Kashmiri Hindus – known as Pandits – at a private event in the US city last week.

“I believe the security situation will improve, it will allow the refugees to go back, and in your lifetime, you will be able to go back … and you will be able to find security, because we already have a model in the world,” said Chakravorty, referring to the exodus of tens of thousands of Kashmiri Hindus in 1989 after an armed rebellion against the Indian rule started in the Himalayan region.

“I don’t know why we don’t follow it. It has happened in the Middle East. If the Israeli people can do it, we can also do it,” he said, adding that the current Indian leadership is “determined” to do so.

“The video was chilling,” Mona Bhan, associate professor of anthropology at Syracuse University in the United States, told Al Jazeera.

“It tries to recreate an idyllic home for Kashmiri Pandits based on ugly and violent exclusions.”

Bhan, herself a Kashmiri Pandit, said the narratives about her community’s suffering have been “instrumentalised as a justification” for the abrogation of Articles 370 and 35A.

“It will, unfortunately, mean that if Pandits do return at all, they will return as settlers. There can be no justification for an ethical return that does not affirm and acknowledge Kashmir’s plural cultures and histories,” she said.

Kashmiri novelist and journalist Mirza Waheed told Al Jazeera that it was “simply outrageous” that a senior Indian diplomat was allowed to express “such offensive and extremist views”.

“One wonders whether the Indian state has outsourced parts of its home and foreign policy to private gatherings where a high-ranking official feels free to essentially call for the expropriation of Kashmiris,” he said.

On August 5, India’s Hindu nationalist government stripped Kashmir of its semi-autonomous status as had been guaranteed under Article 370 of the Indian constitution.

Last month, the country’s only Muslim-majority state was officially bifurcated into two “union territories” and put under the central government’s direct control.

Rights groups have alleged the region’s eight million residents are being denied basic human rights, while thousands, including senior politicians and activists, have been arrested and put in jails in and outside Kashmir. 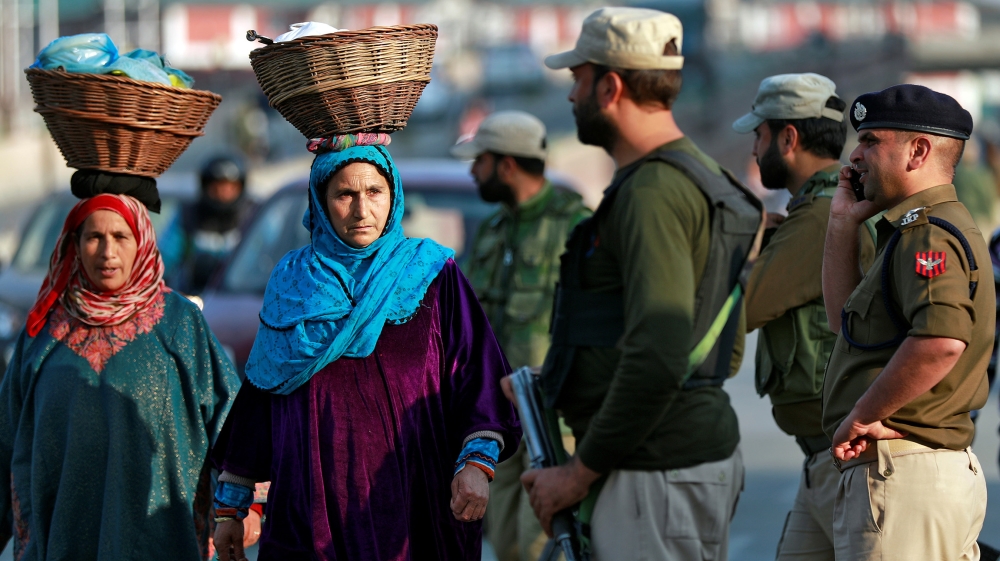 In his address in the video, the Indian diplomat also said the Israelis “kept their culture alive for 2,000 years outside their land” and then went back, referring to the formation of Israel in 1948.

Chakravorty’s words, however, contradict India’s official position, which regards the Israeli occupation of Palestinian territory illegal and has historically backed the Palestinian movement.

Referring to Indian Prime Minister Narendra Modi‘s public meeting in Houston, Texas in September this year, the diplomat said: “You know when prime minister was at Howdy Modi, he got the biggest applause when he said [Article] 370 and not everyone in that hall were Kashmiris.”

Chakravorty was speaking to a private gathering of mostly Kashmiri Hindus who had gathered in New York to meet Bollywood filmmaker Vivek Ranjan Agnihotri, who is also a well-known supporter of India’s ruling Bharatiya Janata Party (BJP).

In his address, Agnihotri said he was seeking help from the Indian diaspora for a film on the 1989 exodus of Kashmiri Hindus from the Kashmir valley he was planning to make.

On Tuesday, a report in the Middle East Eye website said the New York event was “the latest incarnation of the Indian government’s goals of a settler-colonial policy for the valley, which Kashmiri academics and scholars have long warned is the ultimate ambition of the Indian state”.

Waheed said the comparison with Israel “cannot have any other meaning but an endorsement of a settler-colonial project”.

“The diplomat, who clearly supports the idea that Kashmiri Muslim identity should be erased to solve the historic Kashmir conflict, should have caused international embarrassment for India,” he told Al Jazeera.

Waheed said the Kashmiri Pandits’ right to return to their homes in Kashmir is an “inalienable right”.

“I am not sure they would want to return and live in barricaded ghettos. A proper return would be to see and meet them in their old mohallas and villages,” he said.

“I don’t know of any Kashmiri Muslim who opposes the return of Pandits.”

Will India’s lockdown in Kashmir ever end?

“Shows the fascist mindset of the Indian govt’s RSS ideology that has continued the siege of IOJK for over 100 days, subjecting Kashmiris to the worst violation of their human rights while the powerful countries remain silent bec [sic] of their trading interests,” Khan posted.

Pakistan, which refers to the Indian-administered Kashmir as India-occupied Jammu and Kashmir (IOJK), also claims the Himalayan region of Kashmir in its entirety and rules over part of it.

After many on social media questioned Chakravorty’s views and wondered if it was the official Indian position, the diplomat on Wednesday said his comments were taken “taken out of context”.

“I have seen some social media comments on my recent remarks. My remarks are being taken out of context,” he posted on Twitter.

The Indian government has not officially responded to Chakravorty’s statements. Al Jazeera reached out to a senior BJP spokesperson, but he refused to comment on the Indian diplomat’s remarks.

– With inputs from Bilal Kuchay in New Delhi

‘We want them out’: Iraq protesters call for US troops exit