Pakistan’s IT and Telecom sectors on the rise

The Government of Pakistan (GOP) continues to facilitate the IT industry by various sustainable development and accelerated digitization projects, research and innovation, software technology parks, subsidized bandwidth, global marketing, worldwide certifications, internships and trainings. Researchers believe that the telecom sector is complex, extensively regulated and rapidly evolving to keep up with the global markets and initiatives. According to the Pakistan Telecommunication Authority (PTA), the number of 3G and 4G users in Pakistan stood 73.26 million by end-October as against to 72.12 million by end-September 2019. Number of mobile phone users in Pakistan stood 162.98 million by end-October as against to 161.84 million by end-September, which registered a rise of 1.14 million during the period under review. Different sources mentioned that government may be doing a good job in broadening the tax-net in Pakistan through collecting additional revenues. However, some of these tax-reforms may prove counterproductive to the long-term economic growth and prosperity of the nation. The government’s decision to usher in new laws that place excessive tax on the highly regulated and compliant industries is not a good look. Because the corporate sector has already been paying heavy taxes and contributing to the national exchequer. As the technology sector grows rapidly, it is all the more significant for government to offer an atmosphere that is conducive for this growth. However, the telecom and cellular enterprises have always been the easiest prey for the tax regimes in the country. Understandably, this is due to their easily monitored equipment and the traceable digital footprint of their formal transactions. Billions of rupees are paid as advanced licensing fees, to organize each cellular operator, while greater than 10 percent is deducted from every reload of cellular minutes.

Presently, customs duty has been made mandatory on every mobile-device imported into the country. This system named DIRBS has been aimed at regulating the import of commercial and personal smart phones into Pakistan. However, as per 8-month results, only Rs 7 billion of customs-duty have been collected under the scheme. Statistics also showed that the cellular mobile subscribers constitute major part of overall telecom subscriber base; therefore, maximum number of complaints belongs to this segment. Total number of complaints against the CMOs by October reached at 6,245. PTA received 7,819 complaints from telecom consumers against the different telecom operators as of October 2019 and total 7,784 complaints have been resolved i.e. 99.55 percent.

Furthermore, Teledensity for cellular mobile grew from 76.75 to 77.24 percent and broadband subscribers stood 75.30 million by end-October as against to 74.15 million by end-September 2019. 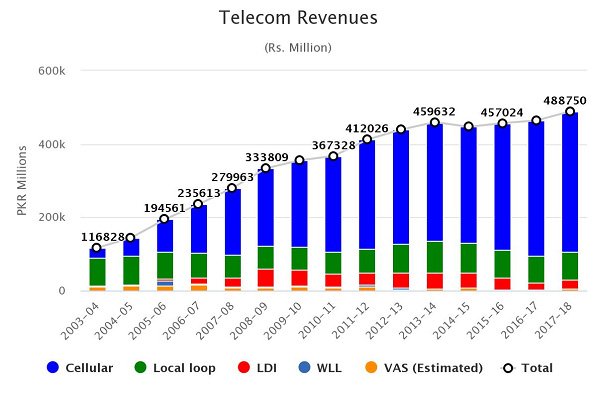 Sources also identified that Pakistan information technology sector exports recorded 14 percent growth in the first quarter (July-September) 2019-2020 and remained $234.607 million as against to $205.797 million during the corresponding period of the last year. Statistics showed that the number of PSEB registered IT and IT enabled services companies has risen to 2,059 as of September this year, as against to 1,820 valid registrations by September 2018, explaining a growth rate of 13.13 percent. PSEB facilitated participation of Pakistan’s IT companies in international events in GiTEX Dubai 2019, Pakistan Tech Summit 2019, and Norway and Canada-Pakistan ICT Forum held in Toronto in September. PSEB organized participation of 20 IT companies in ITCN Asia 2019 held in Karachi in September.