US president says Turkey has informed the United States it will make the ceasefire in Syria ‘permanent’.

US President Donald Trump announced that Turkey said it is stopping combat operations and making a ceasefire in northern Syria permanent, prompting the United States to lift recent sanctions it imposed on Turkish imports in response to the campaign.

“The sanctions will be lifted unless something happens that we are not happy with,” Trump said on Wednesday in a special address from the White House, where he also spoke sceptically about the meaning of “permanent” in “that part of the world”.

Earlier this month, Trump halted negotiations on a $100bn trade deal with Turkey, raised steel tariffs back up to 50 percent, and imposed sanctions on three senior Turkish officials and Turkey’s defence and energy ministries.

The president has been under fire for abruptly withdrawing US troops from northern Syria, with many accusing him of abandoning Kurdish forces, who had been one of the US’s main allies in the fight against the Islamic State of Iraq and the Levant (ISIL, or ISIS).

Following the withdrawal, Turkey launched an offensive against Kurdish forces in the region.

The ceasefire ended as Turkey and Russia struck a deal in Sochi. Under the agreement, Russia and Syria will “facilitate the removal” from the border region of the Kurdish People’s Protection Units (YPG) fighters.

Ankara will also control a 32km-wide (20-mile) stretch between the towns of Tal Abyad and Ras al-Ain, which covers 120km (75 miles) of the Turkey-Syria border, the deal said.

Turkey had long said it wanted to establish a 444km long (276-mile) and 32km wide (20-mile) “safe zone”. However, during the ceasefire, the US and the YPG-led Syrian Democratic Forces (SDF) said the withdrawal would only cover the 120km (75-mile) area between Ras al-Ain and Tal Abyad – something that was also confirmed by the agreement reached in Sochi.

Russia on Wednesday warned Kurdish forces to quickly withdraw from the Turkey-Syria border or be crushed by the Turkish army. Moscow added that the US “betrayed and abandoned” Syrian fighters. Russia is Syrian President Bashar al-Assad‘s main military ally.

Trump said some troops would remain in Syria’s oil fields despite a broader US withdrawal from the country.

“We have secured the oil and, therefore, a small number of US troops will remain in the area where they have the oil,” he said.

Trump also warned that “crippling” sanctions could be reimposed if Turkey failed to honour its obligation to protect religious and ethnic minorities.

The US president initially imposed the sanctions following backlash from Democrats and many within his own party over the withdrawal and Turkey’s subsequent offensive.

Trump’s critics also said he gave up American influence in the region and signalled to future allies that the US is no longer a reliable partner. More than 176,000 people have been displaced by the Turkish offensive and hundreds of imprisoned ISIL fighters have escaped during the conflict.

“There were a few [ISIL fighters] that got out, a small number relatively speaking,” Trump said on Wednesday. “They’ve been largely recaptured.”

Trump has defended his decision to withdraw US troops, saying he campaigned on a promise to get US forces out of Middle East conflicts.

On Wednesday, Trump said: “We’re getting out. Let someone else fight over this long, blood-stained sand,” he said.

Trump had initially said he would “bring our soldiers home” from Syria, but later recalibrated and his administration plans to shift more than 700 to western Iraq. Iraqi Prime Minister Adel Abdul Mahdi has said those troops, however, do not have permission to stay in Iraq permanently.

Iraq’s defence minister, Najah al-Shammari, told The Associated Press the US troops will leave the country within four weeks. 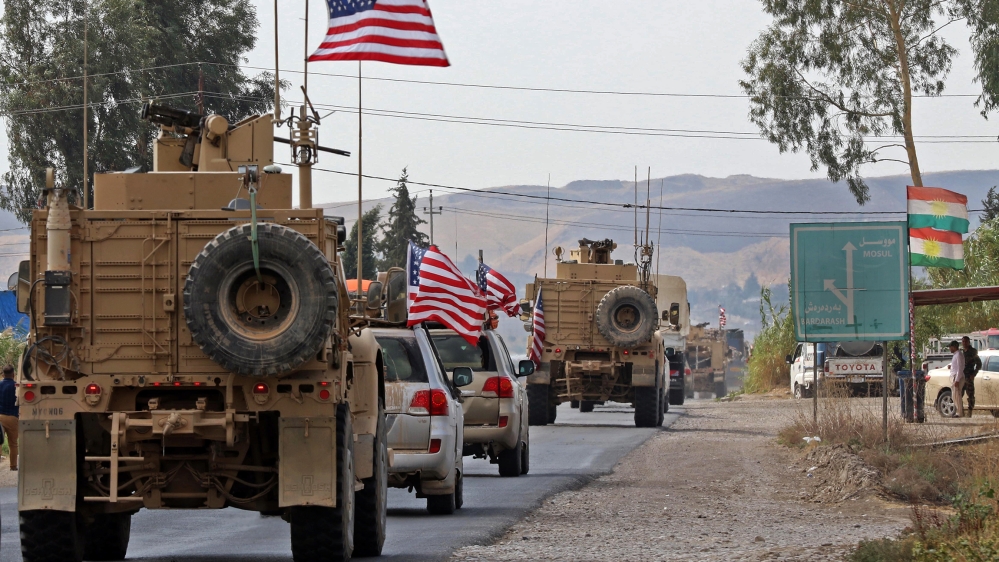 A convoy of US military vehicles arrives near the Iraqi Kurdish town of Bardarash, Dohuk governorate, after withdrawing from northern Syria [Safin Hamed/AFP]

Trump also used Wednesday’s White House announcement, where he was flanked by Vice President Mike Pence and Secretary of State Mike Pompeo, to declare a change of course in US relations with the Middle East, where he said too many American service members had died.

“The job of our military is not to police the world,” Trump said.

“Other nations must step up and do their fair share. Today’s breakthrough is a critical step in that direction,” he added. “I am committed to pursuing a different course, one that leads to victory for America.”

Trump: US imposing new ‘powerful’ sanctions on Iran after attacks

Published in AlJazeera on Jan 9th, 2020, Trump says no US troops hurt in …