How daylight saving time can mess with financial markets

It turns out that the clock change can also have an effect on financial markets. In my research I’ve found that investor decision making is affected following clock changes.

Looking at the stock performance of companies targeted for mergers in the wake of the merger being announced, I found that stocks in these companies on average went up more than normal and were more volatile the first trading day after clock changes. After all, even professional investors are human and daylight saving time influences their decisions as much as anyone else’s, regardless of their qualifications and experience.

Daylight saving time is used by a number of countries including the US, UK and across Europe. Here the clocks are moved forward by an hour at the start of spring to increase the amount of sunlight in the evenings. They are then put back again ahead of winter, increasing the amount of sunlight in the mornings and causing sunset to take place earlier. The one hour time difference seems to have a surprisingly large effect on people’s sleep patterns and behaviour, as a result.

To explore the effect on financial markets, I studied the stock returns of more than 5,500 firms targeted for mergers between 1977 and November 2017 in the US – 90 of these mergers were announced on a Monday after or over the weekend of a daylight saving time change. I looked at mergers because these are typically unexpected events – hence there is generally significant investor reaction to these announcements. Leaks and rumours were controlled for, as well as a number of other factors like company size.

When a merger is announced, the target firm experiences, on average, returns of 10% on the announcement. This is because a merger is generally good news for their shareholders. But when a merger is announced over a weekend or on a Monday following daylight saving time, the average stock return went up by around 2.50% more in relation to announcements that took place on other days – a statistically significant increase in profits for the target firms.

Based on the controls, this change can be attributed to the disrupted sleep patterns of investors, making them overreact to the information available to them in the short term. With plenty of evidence that investors experience relatively stronger mood swings and higher risk-taking behaviour when their circadian rhythm is disturbed, it seems as though daylight saving time causes investors to push the stock prices of target firms to more extreme values.

Time to scrap it?

In March 2019 the European parliament voted to scrap daylight savings time. The motion seemed to have widespread support – it passed by 410 votes to 192 and 84% of the 4.6m responses to its survey on the matter were in favour of the move. But a vocal minority oppose the change, including the UK’s Conservative government.

These results add to this debate surrounding the usefulness of daylight saving time and whether or not it should be scrapped. As well as being bad for people’s health, it seems the clock change also has an undue effect on financial markets.

My study also shows how even moderate changes in sleep patterns can influence investment decisions. Our individual sleep patterns may vary a lot more than just one hour on a daily basis, which raises concerns about how our sleep may influence our decision making.

Of course, this is especially important for investment professionals. The development of sleep hygiene courses, the availability of flexible working hours to match people’s sleep preferences (whether you’re a night owl or an early bird), and the installation of high grade lighting and sleep pods in offices are some of the ways firms can take steps to improve sleep for their staff.

Previous We can halve most forms of violence by 2030. Here’s how
Next The surprising benefits of taking cars off our city streets 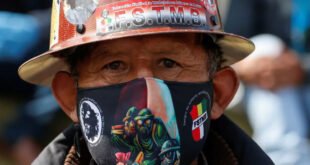 How has the mining industry responded to COVID-19?

The COVID-19 pandemic has had a big impact on the mining industry. The sector has …