No UN breakthrough as Iran snubs talks until US lifts sanctions France’s efforts to arrange a meeting between Trump and Rouhani falters after US tightens punishing sanctions on Tehran.

Iran‘s President Hassan Rouhani has rejected what would have been a historic meeting with US President Donald Trump, despite last-minute European efforts to ease tensions, blaming Washington for its rigid position on sanctions against Tehran.

Addressing the United Nations General Assembly on Wednesday, Rouhani said there would be no talks so long as the United States maintained its economic pressure.

“I would like to announce that our response to any negotiation under sanctions is negative,” Rouhani said hours after the US widened sanctions against Iran.

Rouhani dismissed the idea of a photo-op with Trump, who is fond of drama and held three made-for-television meetings with North Korean leader Kim Jong Un.

“Memento photos are the final stage of negotiations, not the first one,” he said.

French President Emmanuel Macron had shuttled between his Iranian and US counterparts over two days at the UN, trying to arrange an encounter that he hoped would reduce the risk of all-out war in the Middle East.

Iranian Foreign Minister Mohammad Javad Zarif had also signalled that Tehran would be open to permanent inspections of its nuclear facilities if the US dropped sanctions.

By Wednesday, however, Rouhani said he doubted the sincerity of the Trump administration to negotiate, pointing to officials’ boasts of applying “the harshest sanctions in history” against Iran.

“How can someone believe them when the silent killing of a great nation, and pressure on the lives of 83 million Iranians, especially women and children, are welcomed by American government officials?”

“The Iranian nation will never, ever forget and forgive these crimes and these criminals,” he said.

On Trump’s last scheduled day at the annual UN summit of world leaders, Secretary of State Mike Pompeo said the US would punish Chinese companies and their chief executives for buying Iranian oil. 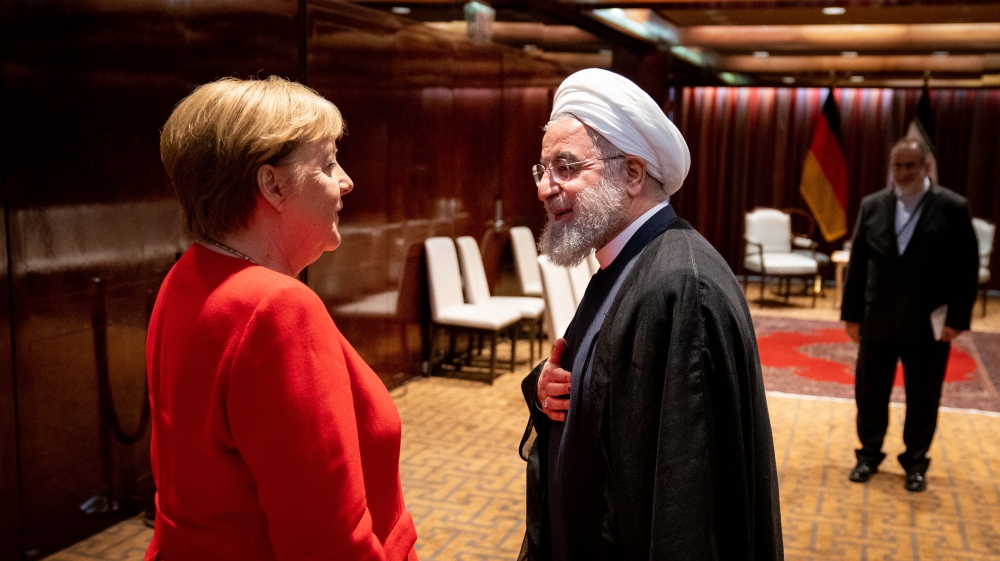 “We’re telling China, and all nations – know that we will sanction every violation of sanctionable activity,” Pompeo told a pressure group opposed to Iran’s clerical regime on the sidelines of the United Nations.

The US also announced that it was barring senior Iranian officials and their families from entering the US.

During her meeting with Rouhani on Tuesday, German Chancellor Angela Merkel had already hinted at the difficulty of arranging a meeting between the US and Iranian leaders, saying Tehran’s condition on US sanctions was “unrealistic”.

In his speech at the UN, Rouhani also warned that the Gulf was “on the edge of collapse”, urging Iran’s neighbours not to entrust the security of the region to the US.

“Security cannot be bought or provided by foreign governments,” he said.

“The US is not our neighbour. It is the Islamic Republic of Iran that is your neighbour,” Rouhani continued as he presented an alternative regional security pact that promotes freedom of navigation and free flow of oil and other energy resources.

“A single blunder can fuel a big fire,” he warned.

Tensions between Iran and the US have escalated since President Donald Trump’s decision last year to withdraw the US from the 2015 Iran nuclear agreement and reimpose crippling sanctions. 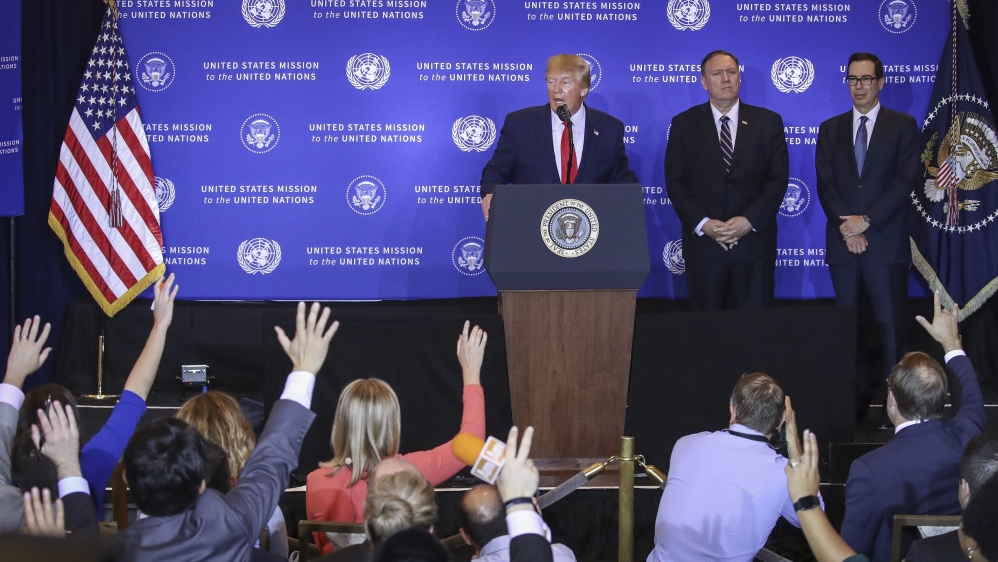 EU foreign policy chief Federica Mogherini acknowledged struggles to preserve the pact, from which Iran has stopped strict compliance as it presses for economic benefits.

“I will not hide that it is increasingly difficult to do it,” she told reporters after talks among European powers.

Iran deal ‘all but dead’

Mehran Kamrava, of the Center for International and Regional Studies at Georgetown University in Qatar, said the nuclear deal was “all but dead”, despite some European nations, such as France and Germany, working hard to preserve it.

Kamrava said Rouhani made an important point about how the landmark accord could be used as a platform for the US and Iran to talk about other larger issues – a point he noted was probably “too subtle for Donald Trump to pick up”.

“Its fairly obvious, and in fact, the Iranians have been saying this, that the nuclear issue could be the basis for dialogue and negotiations over bigger issues the West is concerned with – for example, Iran’s support for Hezbollah, the developments in Syria, Iran’s tough rhetoric against Israel.”

Meanwhile, Al Jazeera’s Zein Basravi, reporting from Tehran, said Iran was in “a much stronger position” compared with one year ago when its economy was in “tatters”.

“What we have seen in the last 24 to 48 hours is a very different delegation from Iran,” Basravi said.

“We have seen jovial photographs and videos of Iran’s president meeting various world leaders and we have seen a much stronger representation by the Iranian president in this speech … and it’s going to be obvious to the people in Iran watching what he’s saying.”