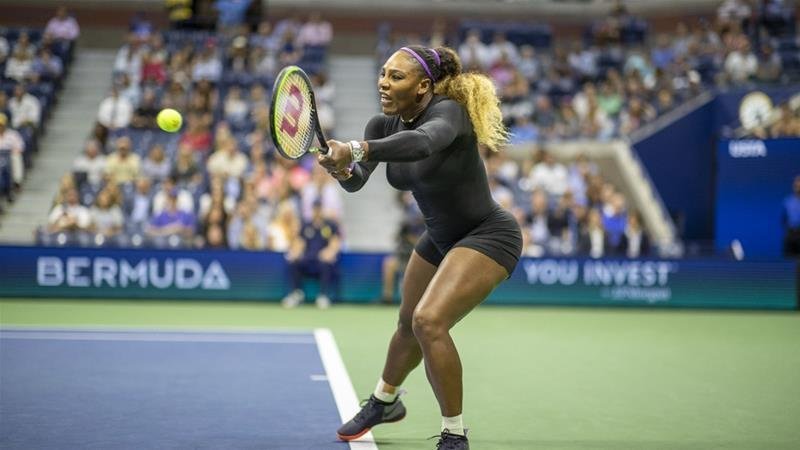 Williams will face Ukraine’s Elina Svitolina, who she leads 4-1 in head-to-head, in the semi-finals [Getty Images]

The American overpowers China’s Wanq Qiang, firing off 25 winners compared with zero from her opponent.

Serena Williams has claimed her 100th victory at the US Open in style, overwhelming her quarter-final opponent Wang Qiang of China in a blistering 44-minute performance.

“I never thought that I would get to 100,” Williams said on court after the match on Tuesday. “It didn’t cross my mind I would still be out here. I love what I do. I love coming out with you guys. It’s so special. I never want to let it go.”

The 37-year-old American was dominant from the start, firing off 25 winners, compared with zero from 18th-seed Wang, and winning 90 percent of her first-serve points.

“It feels good,” Williams said of her performance. “This is how hard I’ve been working. It feels like … hard work pays off when that happens.”

Williams pumped her fist in celebration after firing off a forehand winner in front of a roaring crowd to end the contest.

“I am who I am. I’ve always been the person that goes out there and roars and screams and complains and cries and fights,” Williams said.

Wang, who had not faced Williams before, was unable to save any of the five break-point opportunities against her and said she simply could not stand up to the power from the American champion.

“I cannot handle it. Just too much for me,” said Wang.

Williams also praised the progress made in women’s tennis over her career, calling it the “premier sport for women”.

Williams will face Ukraine’s Elina Svitolina, whom she leads 4-1 in head-to-head, in the semi-finals.

“She doesn’t make a lot of mistakes,” said Williams when asked about the upcoming matchup. “She’s one of those players that does everything really well.

“So I have to do everything well, too.”

Svitolina beat Britain’s Johanna Konta on Tuesday over 100 minutes and said afterwards: “I don’t think that I was expecting going into this tournament that I am going to make semis.”

“I’m just taking one match at a time. It is a grand slam,” she added.

When asked about Williams she said: “Definitely it is a big challenge to play against her. Obviously, Serena is amazing champion. It is probably going to be really tough against her.”