PAGE: Kindly tell me about yourself:

BADRUDDIN FAKHRI: I may briefly tell you that I passed my ICMAP final in 1976. At that time I was working in an Indian Cement Company Associated Cement Co. Ltd, which had two cement plants in Pakistan and 16 plants in India with its Head Office in Bombay. They had very strong systems whereby they were able to control 18 factories very effectively. Having worked on those systems helped me in the growth of my career. After the war with India which broke out in 1965, these two factories were taken over by the Government of Pakistan and were managed by State Cement Corporation of Pakistan. I was working in the Head Office of Associated Cement till 1980, when I was transferred to Thatta Cement Co. Ltd as Chief Financial Officer. I was transferred to National Cement Industries Ltd in the middle of 80s, and in the late 80s was transferred to Javedan Cement Ltd. In 1993, I joined Pioneer Cement Ltd. In 2007, I got an offer from Galadari Cement (Gulf) Ltd and joined them in September 2007 as Chief Executive Officer. I am still working there and have strived very hard to complete this unfortunate project but it is not yet complete due to multiple reasons.

I have always been keen in furthering the cause of professional education in the country. I was nominated as Chief Editor of the official magazine of the Institute of Cost and Management Accountants of Pakistan when I was elected as member of its National Council. Thereafter I have held following positions:

PAGE: What are your views about the cement production capacity and sales in the domestic market of Pakistan as well as export from Pakistan?

BADRUDDIN FAKHRI: Allah Subanahu wa ta`ala has been kind to provide quality raw material deposits in Pakistan used for producing cement. This is one of the reasons that Pakistani cement is famous for its good quality. The installed capacity of cement plants in the country in 2006 was 20.8 million tons, which went up to 45.6 million tons by 2016 and to 46.4 million tons in 2017. Unfortunately, due to poor economic conditions of the country, per capita consumption of cement in Pakistan continues to be one of the lowest in the world. However, fortunately with the signing of CPEC (China-Pakistan Economic Corridor) agreement between China and Pakistan, a new chapter of construction and development in the country has unleashed. Demand of cement has been unprecedented since then.

During first four months of current financial year, domestic sale has been 19 percent higher than the same months of last year. The future of cement industry seems to be very bright in Pakistan mainly due to CPEC which it is hoped will be a game changer, although it is not yet clear what benefits will accrue to Pakistan in financial terms. The industry has also entered into a massive expansion mode. The capacity of producing cement is expected to jump to nearly 70 million tons within next few years.

Traditional export of cement to Afghanistan has been going down mainly due to import of cheaper cement from Iran. Czech Republic is investing in a 480,000 tons cement plant in the west of Afghanistan. Perhaps we cannot see again the previous era of cement exports to Afghanistan when Pakistan was the biggest exporter of cement to the neighboring country

Exports to South Africa have suffered after their government applied anti-dumping duties on Pakistani cement.

PAGE: How about export of cement to India from Pakistan?

BADRUDDIN FAKHRI: Export to India has also declined due to strained relations between the two countries. However, long term scenario says after 15/20 years looks promising. Pakistan can immensely benefit from export of cement to India, because as per research report presented by an Indian Consultant in CEMTECH conference held in Dubai, reserves of limestone deposits in India are depleting fast. It was indicated that reserves will exhaust after 2030. As such it is expected that further expansion of Indian cement industry will see a slow-down and India will start importing cement in a big way.

PAGE: How would you comment on foreign investment in the cement sector of Pakistan?

BADRUDDIN FAKHRI: President Ziaul Haq had invited foreign investment in the cement sector of Pakistan. Attock group of Syria and Galadari group of UAE showed interest in the cement sector. The Attock group was able to complete a cement plant but unfortunately the project of Galadari group was adversely affected due to litigations on the freehold land as well as the lease land. It took nearly 15 years to get the final verdict in favor of the Company by the Supreme Court of Pakistan. There have been no litigations on land thereafter. After Galadari group negotiated its cement plant with a European manufacturer, the machinery started arriving in the late nineties. Mr. Latif Galadari, the main sponsor unfortunately expired due to a massive heart attack. The family of the deceased tried to complete the project, but there have been innumerable impediments with the result that the same is still lying incomplete. Recently Pioneer Cement Ltd have signed an MoU with the family of late Mr. Latif Galadari to acquire Galadari project. It can be hoped that it will be completed on a fast track basis after its acquisition by Pioneer Cement Ltd.

Bestway Group of UK headed by Sir Anwar Pervez (an overseas Pakistani) started a cement project in Hatter, Punjab and further invested in the sector by putting up new plants as well as by acquiring existing plants.

Chakwal Cement project was initiated by Chakwal Group. After completion of this project, M/s. Lafarge, a well known International Cement Group had bought this plant. However, few years back they sold the plant to another cement company.

One can say with confidence that cement sector in Pakistan has a bright future. 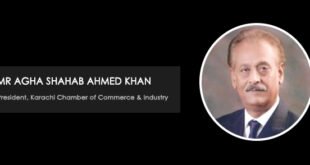 Digital and legally vibrant model of remittance need of the hour